Meningococcal disease is a very severe bacterial infection (Neisseria meningitides) of either the blood stream (sepsis) or the meninges, the thin lining that covers our brains and spinal cords. While Neisseria meningitides can also cause diseases such as pneumonia and arthritis, it is the most common cause of bacterial meningitis and sepsis in the U.S.

Symptoms of meningitis include sudden onset of fever, headache and a stiff neck. Other symptoms may include nausea, vomiting and altered mental status. When N. meningitides infects the blood (sepsis) the symptoms of infection come on very, very quickly. That’s what makes it so scary. People can have flu-like symptoms and then die within a couple of days. They get that sick, that quick, and all our modern medical advances cannot stop the progression of the disease.

Meningococcal disease is spread by direct, close contact with the nose or throat discharges of an infected person. This is one reason teens and college kids are at higher risk. They tend to share food and drinks, kiss and hang out together in dorms. 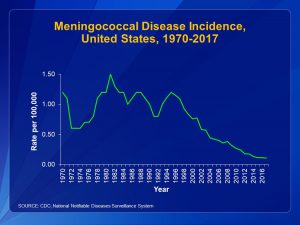 There are currently three vaccines available to prevent meningococcal meningitis. The commonly used and preferred one is Meningococcal conjugate vaccine (MCV4) for people ages 2-55.

This vaccine protects against four kinds of meningococcus serotypes (types A, C, Y, W-135) and these four types cause about 70% of the disease in the U.S. The vaccines are 85-100% effective in preventing disease. Unfortunately, the vaccine does not protect against serotype B which is responsible for about a third of all adolescent cases and 60% of cases in children under 5. This is why young children are not routinely given the vaccine unless they are at risk for catching the disease.

All 11 to 12 year-olds should be vaccinated with MCV4. The new recommendation is that a booster dose should be given at age 16 as well.

Do we need a better vaccine that covers serotype B? Absolutely. But that doesn’t mean we shouldn’t use the one we have now. Vaccinating young children, and all adolescents, who are at risk for meningitis reduces the overall number of cases of the disease in our community, making us all safer.

Getting the meningococcal vaccine is much safer than getting the disease. But like any medications, an allergic reaction or adverse side effects may occur.

Adverse reactions to the vaccine include:

Less than 3% of recipients reported any of these reactions as severe.

Why is a booster shot recommended?

In 2005, when the MCV4 vaccine was first recommended for adolescents, the assumption was that protection would last for 10 years. Unfortunately, we now know that it is closer to 5 years. That means that the dose given at 11 or 12 years may not offer protection through the high risk years of 16-21. The CDC recommends the booster to protect those older teens. Delaying the shot until your child is 16 is not a recommended idea.

Why don’t babies get immunized against meningitis?

That is a very good question, and the answer is a little complicated. First thing you should know is that meningococcal disease is very serious but rare, and thanks to the vaccine, the rates of disease have declined significantly in the U.S.

Of the children under 5 years that do get meningococcal disease, most cases are in infants under 6 months of age. These little guys are too young to have received the minimum 2 or 3 doses of vaccine that are needed to provide protection.

So when the powers that be, such as the ACIP, debate adding MCV4 to the immunization schedule for infants, the cons (currently) outweigh the risk of disease. (CDC Vaccines ACIP)

What are the cons of adding the vaccine to the infant schedule?

That said, infants at high risk for meningococcal disease should be immunized. Your pediatrician can tell you if your child is at risk. High risk groups include any child who is immunocompromised or does not have a spleen.

Healthy adolescents and young adults don’t have to worry about contracting meningococcal disease.

Many of the diseases we have talked about on this website mostly affect the very young and the very old. Meningitis is different, and no respecter of social class or organic food consumption. We worry about the disease because it can progress rapidly, killing an otherwise healthy young person in as little as 48 hours.

Many people assume that if they choose not to vaccinate and their child becomes ill with a vaccine preventable disease, that modern medicine can save their lives. This is not the case with meningococcal disease. Even our most powerful antibiotics cannot save some kids.

Meningococcal disease is spread by casual contact with an infected person, such as shaking hands.

Meningococcal meningitis is spread through air droplets and direct contact with an infected person. It is not spread through casual contact such as handshaking. However, kids living in dorms or traveling together as sports teams often do have direct contact, not just casual.

Guillain-Barré Syndrome and the Menactra Vaccine

In 2005, 5 cases of GBS occurred within 2-5 weeks after these teens had been vaccinated. These cases were reported to VAERS. (LINK TO VAERS PAGE) prompting the CDC and FDA to issue an alert regarding a possible connection.

In turn, this possible association prompted two very large studies, one involved more than 10 million adolescents who had and had not received the vaccine. Neither of the studies found a relationship between Menactra and GBS. Because GBS is not that common in adolescents, we don’t know the precise rate at which it occurs, but epidemiologists estimate it to be about 1-2 cases in every 100,000 persons every year. So, the number of cases of GBS that were reported in MCV4 recipients is similar to what might have been expected to occur by chance alone.

For several years, investigating agencies continued to caution providers about giving vaccines to those with a history of GBS, but additional studies have continued to show no link between vaccines and GBS. At this time, there is no scientific reason not to give vaccines to people who have had GBS. However, medical providers should weigh the risks and benefits carefully. (AAP)

This is a classic case of VAERS data that-while being a useful tool and early warning system-cannot be used to determine causality. GBS occurs in about 1 in every 100,000 people every year. In cases where GBS appeared to be linked to vaccines it was found that there was no actual increase in the rate of GBS. Guillain-Barré Syndrome and Menactra Meningococcal Vaccine

The CDC took the possible link between Guillain-Barré syndrome and MCV4 very seriously because GBS has been more closely associated with another vaccine. In 1976, the swine flu vaccine appeared to increase the number of cases of GBS, beyond that which was expected, to about 1 additional case for every 100,000 vaccine recipients. Given the possible association (it would be confirmed much later) and that the swine flu outbreak that year was smaller than expected, the vaccine was pulled. No other flu vaccine since that time has had any connection with GBS. (History of Vaccines)

The highest number of meningitis cases occurs in freshmen college students living in dorms. (Yes, it’s true that freshmen are more likely to live in dorms.) We have dorm-dwelling freshmen in the very center of our community. They work in our daycares, in our restaurants and in our stores. If you have a teen, please get them vaccinated as soon as recommended (age 11 with a booster at 16). If you know a teen that isn’t vaccinated, please encourage them to do so ASAP.

Know Before You Go

Vaccination is required by the government of Saudi Arabia for all travelers to Mecca during the annual Hajj. Who knew? Microbiologists who are exposed to isolates of N. meningitides, as well as military recruits and persons who travel to countries in sub-Saharan Africa’s “meningitis belt,” should also be vaccinated every 5 years.

Where to Get Vaccinated